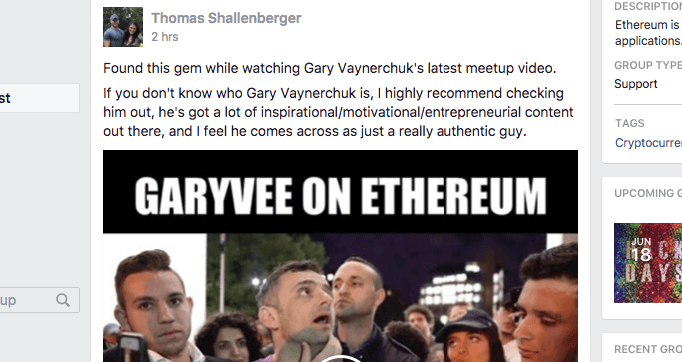 Note: This report was written in 2017 and remains published for reference purposes.

The entrepreneur and influencer Gary Vaynerchuk on Ethereum (in 2017):

Ethereum’s got huge upside […] I still know that there’s so many people that know so much more, but here’s what I would say: It can’t lose over time. So I don’t know how that manifests but it’s binary. It’s going to work over time. Here’s what I don’t know - I don’t know how I think because I haven’t done my homework and what governments will do about it. [Ethereum is backed by big companies] - Big companies are much smaller than governments. So I don’t know that. The reason I love Ethereum is that it’s so much more agnostic than a currency. […] So overall I think it’s gonna work.

There is another version on Facebook in the Ethereum group that is longer, Gary goes on to hint that maybe if the crypto space continues to grow someday in the future he’s going to say ‘You know what, fuck it,’ and go full on crypto.

Here is a screencast of the missing part from the private video from Facebook:

Gary Vaynerchuk had been asked many times about his opinion on bitcoin in his Youtube ask show. Until this time, he would always say he understands neither crypto nor financial regulations hence he can’t talk about either.