What do crypto traders call the Bart formation and how to trade it?

In crypto, the Bart Formation, or just Bart, is a short-term chart pattern.

In a Bart formation, the cryptocurrency market rallies sharply, usually on a shorter timeframe like 30M, and after a period of flat (sideways) action retraces all of its previous gains.

The name Bart came from the pattern’s likeness to the shape of Bart Simpson’s head.

How to interpret the Bart Simpson chart pattern

On bitcoin markets, the Bart shows up only after long periods of sideways. In those times the volumes decline and not much is happening on the markets. On altcoin markets, where thin order books are normal, you can still see Barts quite often.

Considering this kind of market environment, what does the Bart pattern mean?

The idea behind the Bart pattern is that there was an attempt to start a run-up in the market. It could have been done by a single actor or by means of organic uncoordinated speculation, that doesn’t really matter.

The important information is that this attempt did not catch on. Bart is a signal of relative weakness on the market: The speculation is trying to get ahead of the market.

Alternative name for Bart Simpson formation is Pump and Dump.

Sometimes referred to as “traB”. Alernative name would be “poop and scoop”, but this one is not used as much anymore. 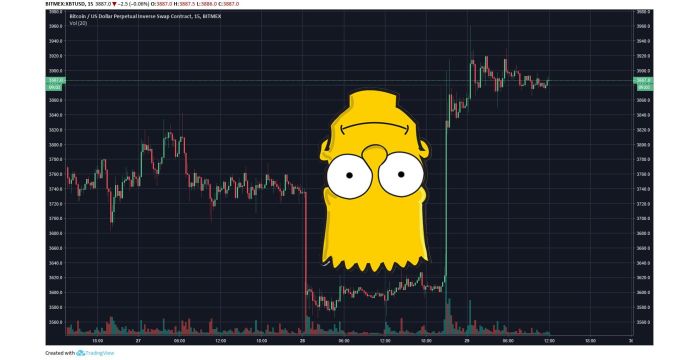 Quite typically, crypto markets will show bart patterns at the end of a channel or triangle formation that has been in the making for a few weeks.

Ends of triangular formations are in particular a good place to spot bart formations, because the volume there is getting lower - a lot of traders go to the sidelines, waiting for a decisive move.

The same is also true at the end of a bear market or when the market was ranging for so long that everyone is bored and nobody wants to trade.

Does that make the Bart formation after a flat period a good place to open a long? Only if your risk tolerance is high.

Remember that Bart is a failed attempt at starting a run-up. There was some follow through, but not enough yet. The market needs to build up the momentum a little longer, and in the meantime a fundamental event can happen that changes everything … In other words, there is no way to time the market from the presence of Bart patterns alone.

However, it does show some early confidence on the market.

So, those are the options:

ScriptSpotlight: Kalman Filters on Tradingview -
Wyckoff Avoidance Strategy in Cryptocurrency Trading - Wyckoff method of avoidance means to trade only the best stocks in the leading sectors. How to apply this motto when trading cryptocurrencies?
STRATEGY

Scalping Crypto (Updated for 2022 Crypto Markets) - All about crypto scalping - the tools you need, the cryptocurrencies to prefer, the exchanges that will not crash on you.