How is it with arbitrage opportunities in South Korea 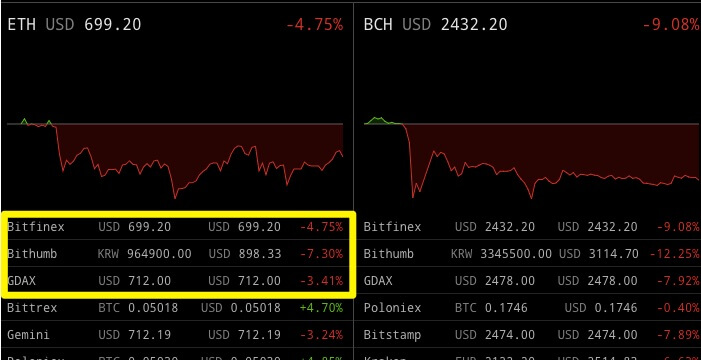 To summarize what is known as everyone seems to be interested in that at the moment.

Korbit and Bithumb, the two most popular cryptocurrency exchanges in South Korea, have been trading with significant premiums compared to the west for some time. It is only after yesterday’s “old news” presented as new FUD that a lot of people got interested.

If you have missed the news, yesterday the information started going around that South Korea is shutting down crypto exchanges. There is now an official message in English that explains it is just a regulation against anonymous trading which was made easier by a feature of the banking system in SK that is called “virtual account” - a bank account assigned from a pool used for instant fiat money transfers.

So is there an arb opportunity in South Korea? It is, but not as good as it looks.

While opening an account on a Korean exchange is not a problem, moving the fiat money is both limited to residents and limited in amount. From the Crypto of Korea Kakao group:

Legal foreign residents are kosher, but new regulations will see the closure of accounts held by non-residents. The arb is also basically limited to about 50k USD a year as Korea has pretty tight capital restrictions.

So for instance a Canadian national residing in Korea can pull this off but the profit is still limited, plus he might get questioned for money laundering.

For the rest of us in the pack, there is no feasible way to profit from the premium at all. One obvious way would be via cryptocurrency but there are already enough arbitrage bots on the ratio markets that the prices of all cryptocurrencies trade with premiums there.

An introduction of a “stablecoin” pegged to whatever USD price - however unlikely that is - would be a way out but in reality people who already have ratio arb bots would jump on it and the crypto premium would be gone quickly. Similar rare (and very brief) opportunity might happen on listing of any new coin to the exchanges, if the new coin would start at a western price level. Again, people who already arb there, and that means perhaps even the exchanges themselves, would have advantage.

If you still want to monitor the prices in KRW the best way is this cryptocompare page that shows coins traded in Korea in KRW. If you are looking to follow the premium, you can do that either on TradingView or on CryptoWatch homepage if you set the third column to show prices in USD.