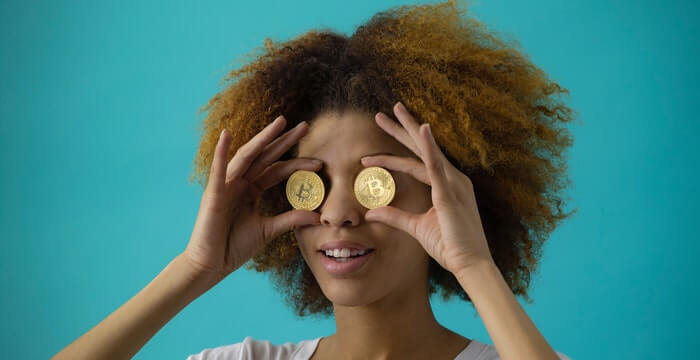 Lets kick this article about altcoin wallets right off with the obligatory reminders. Apologies if these are not new to you.

Does it sound like FUD. Well, exchanges are targeted by cyber criminals more than individuals, they hold larger amounts of crypto. DeFi is the primary target since its inception and crypto exchanges are no longer run by amateurs, but it is a plain fact that one of the latest exchange hacks happened in early 2022 when AscendEX lost 77 million dollars. In the past, we had the Tether hack in 2017, the DAO hack in 2016 and the infamous Bitfinex hack in 2016.

Crypto exchanges are not banks. If you send LTC, let’s say, from your Bitstamp account to your Bitfinex account, it has a regulatory impact. Bitstamp would do what normally only companies with banking license can do: They would be sending your money on your behalf between two financial institutions.

Exchanges detect such transactions and may trash them. You can go spend months dealing with customer support to retrieve your funds, sure. But you might have better things to do.

This post lists out some useful habits to build to protect yourself against phishing because way too many people still fall for it even though they know they shouldn’t click on anything without thinking first.

Altcoin Wallets: Top Of The Market

Ledger wallets are the most popular hardware wallets. Trezor develops technically really interesting products with Shamir seeds and all, but ultimately, Trezor wallets are so expensive and not getting any cheaper as time passes.

More in sync with everyone’s preferences in the recession, Ledger in 2022 released a new version of the Ledger wallet - the Nano S Plus. This model is very much like the old Ledger Nano, except it has much larger storage capacity. On the Nano S you won’t be able to run more than 3 crypto wallets at the same time.

The Nano S Plus can take 100 of them at once, at a prize point that is only a tad over the Nano S and not almost twice as much like the Nano X. So this is great for all your DeFi trading and staking needs.

Needless to say, Ledger Nano S Plus promptly went out of stock a few weeks after launch.

You might also try your luck with a local authorized reseller and buy your Ledger Nano S Plus there. Always check that your reseller is authorized by Ledger, though. Just click through to the official list at Ledger’s website and find a store near you.

Ledger Nano X: The best choice (and always in stock)

Everyone’s Favorite Commercial Altcoin Wallet is and has been the Ledger Nano X.

The market has spoken. Ledger Nano X can be called the best cryptocurrency wallet that’s currently out there. It has limitations, but for the day to day use it has everything you need as a trader or hodler.

Should you get Nano X or Nano S?

Ledger were the pioneers of supporting altcoins, and you will find most new cryptocurrencies are implemented quickly. It’s part of their ethos. You will get over 100 supported cryptocurrencies on any model of Ledger wallet: All the big crypto, all the dino alts, most of DeFi, most of NFTs. Full list of supported coins at Ledger.com.

On the other hand, Nano X is vastly more expensive. If you only want to get the better model for the increased storage capacity, try to get your hands on the Nano S Plus.

The Nano S Plus has big enough capacity but no extra frills, which makes it cheaper.

Ledger Wallets: What you need to know before you buy

Exodus is a multicoin wallet for deskop and smartphone with an integrated swap exchange inside the app.

In its desktop version, Exodus supports staking directly from the wallet.

Exodus is well time-testedm, and currently your best option for a free multicoin wallet: 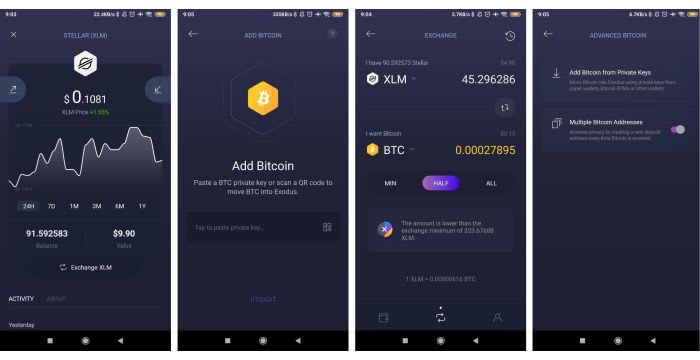 The Exodus wallet app is super user-friendly. It won’t let you do anything too technical, but it is great for beginners. You can even stake your PoS altcoins through Exodus without any technical understanding.

How to set up Exodus for the first time

Exodus wallets are under ceaseless development, new cryptocurrencies as well as functionalities are added all the time. At the moment, the stablecoins supported by Exodus are the following:

The nice touches you get in every Exodus wallet 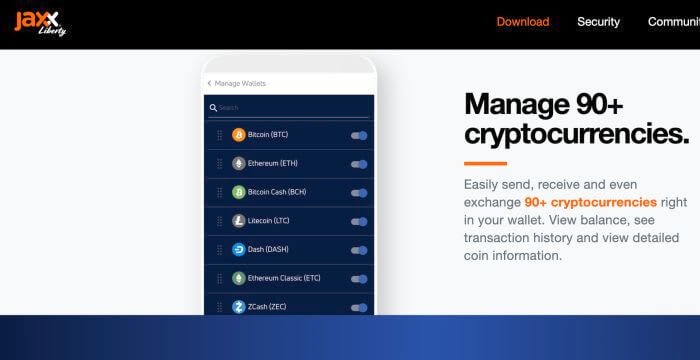 Jaxx is still one of the most popular multicoin wallets these days is Jaxx. It is available as browser extension, desktop app and mobile app.

Jaxx wallet is user-friendly and good for beginners:

Since Jaxx 1.2 you get Shapeshift exchange integrated within the wallet.

If you only need to store BTC, ETH and XLM, the simplest smartphone app for you is the blockchain.com wallet (formerly blockchain.info).

Be careful though: The blockchain.com wallet is the favorite target of imposter attacks. Always double check you are downloading the app from developer company Blockchain Luxembourg SARL.

There are two reasons to use a single coin wallet:

Your coin is too novel to be implemented in multicoin wallets…

Some really novel cryptocurrencies were not supported by the popular multi-coin wallets like Jaxx or Exodus for the longest time, because they run on a ledger that is too difficult to integrate.

These usually have their own dedicated wallet apps for desktops and smartphones.

We will also mention two Bitcoin-only wallets that implement special privacy features. These choose not to implement altcoin support in order to keep their security tighter. 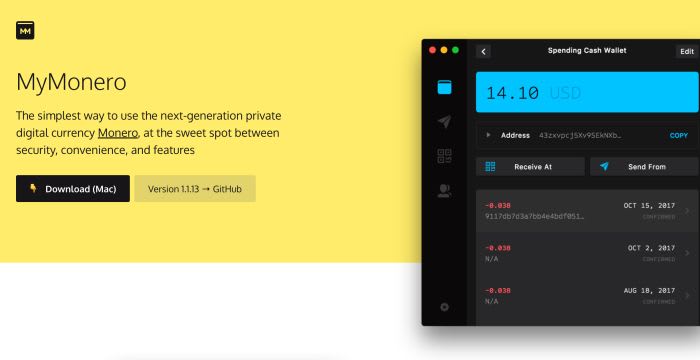 MyMonero has been long endorsed on the Monero’s official website (getmonero.com).

MyMonero was originally only available as a web wallet. In 2020 you get the monero web wallet and a desktop/smartphone app.

The MyMonero wallet is super simple.

If you don’t want to use MyMonero, you have other options - read here. 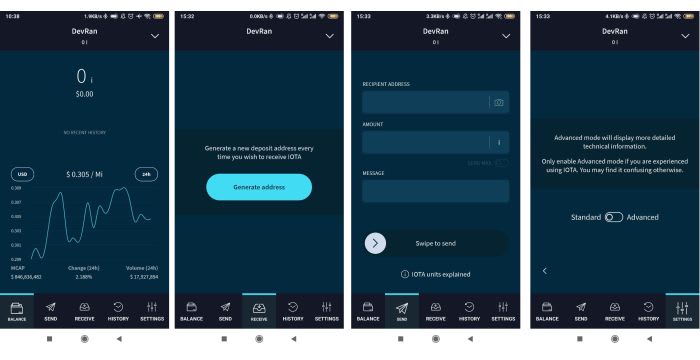 Trinity is a relatively new release, and the first IOTA wallet that works without weird high-tech settings hacks. Trinity is the official wallet for IOTA and it is a desktop and smartphone app.

Using Trinity is easy and great for beginners (not that you’d have much choice though) but you can still enable advanced, more technical mode.

In-depth guide: How to secure your IOTA wallet.

This is not a post about Bitcoin wallets, and Samourai will be an overkill for traders who just need something easy to move money around.

But there are certain situations that would warrant the use of a wallet like Samourai.

Exchanges like Coinbase and Kraken check for the history of the coins you deposit and will make you trouble if your bitcoins were on the darknet or a casino site before.

These policies may cause you trouble when you try to take profit from crypto you earned trading on no-KYC exchanges, such as (formerly) BitMEX, Bitfinex or OKEx.

That’s when you could use Samourai wallet and it’s Staggered Ricochet function. 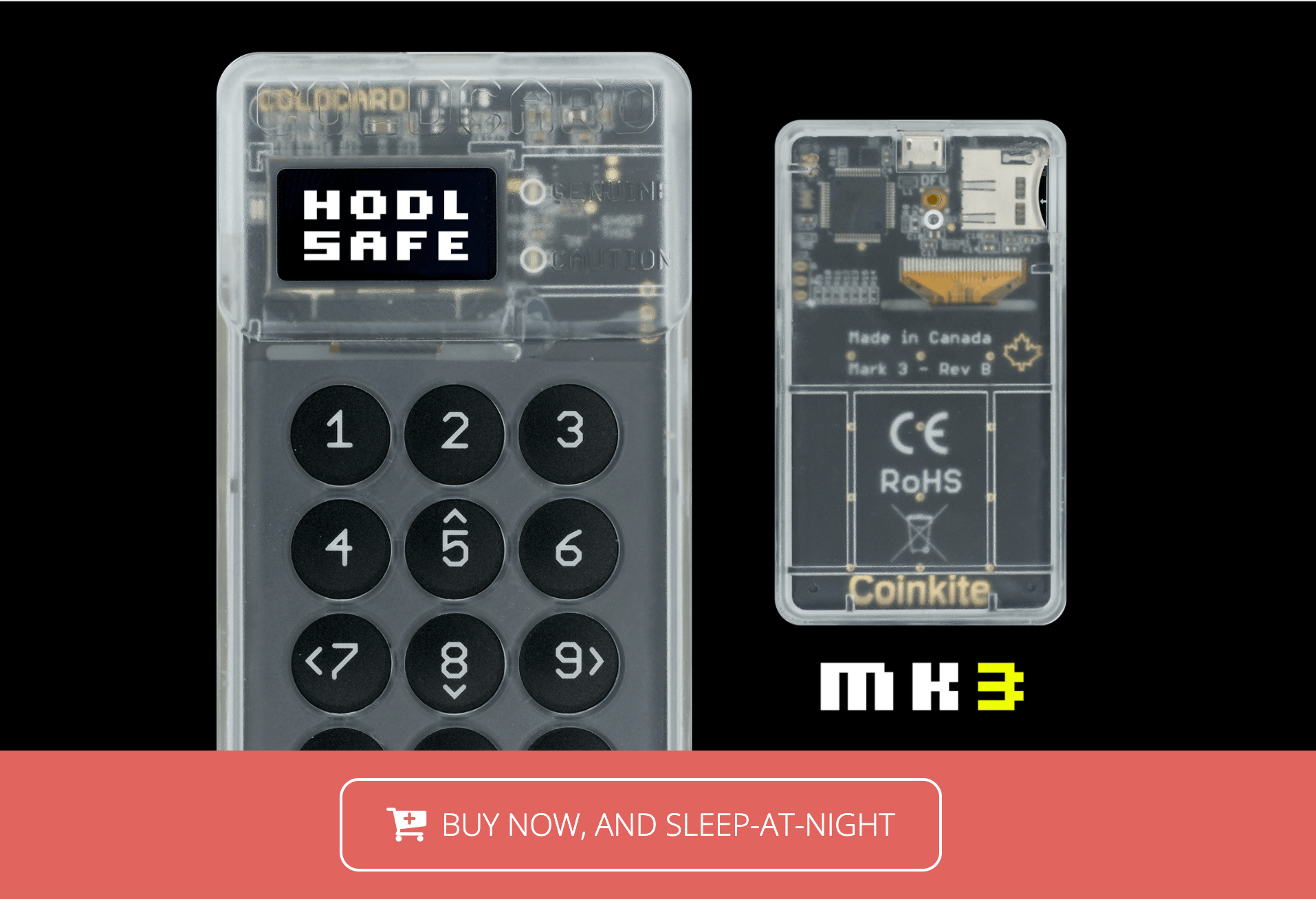 Get it at the official coinkite store

Coldcard is one of the less mainstream but more secure bitcoin wallets.

This is an altcoin trading website, but if you have a stash of BTC for the long run that you don’t trade with, consider giving Coldcard a shot.

It’s one of the wallets that solves the real issues. The hardware is put together with some sense, the chip has a secure element, the device is compatible with all usual app wallets.

What’s the secure element good for?

Secure element encrypts what is stored in it. That means that without the PIN there is no access to the seed.

Even in case of brute-force, sec chip only gives you 13 tries before bricking itself.

And then in Coldcard particularly, there is one more layer for the case that the sec chip would have a vulnerability discovered: Coldcard encrypts the contents of the sec chip with an additional key stored in a different part of the hardware.

The best of Coldcard, though, is the suite of tools it provides for duress situations.

The latest model, Coldcard MK3, is available at the CoinKite store with a 5% off for payments in BTC.

What to Choose: Hardware Wallets or Desktop and Smartphone Wallets?

But if you are planning to hold an altcoin for more than one year, you should really get a hardware wallet.

You will still need to keep it updated, but in your case you are still getting the best security even from basic setups.

The reason is that your chances of messing up something or getting hacked are minimal if you have the private key on any dedicated device simply thanks to the fact that you don’t use the device on a daily basis.

The easiest black-box choice here is a commercial hardware wallet device. But if you are a geek, you can absolutely have a smartphone wallet on a dedicated smartphone. That is, a device you don’t use for anything else. Using dedicated devices to store crypto is the so-called tiered storage method.

If you want to hodl your BTC holdings only, you can do Electrum wallet on a dedicated laptop. 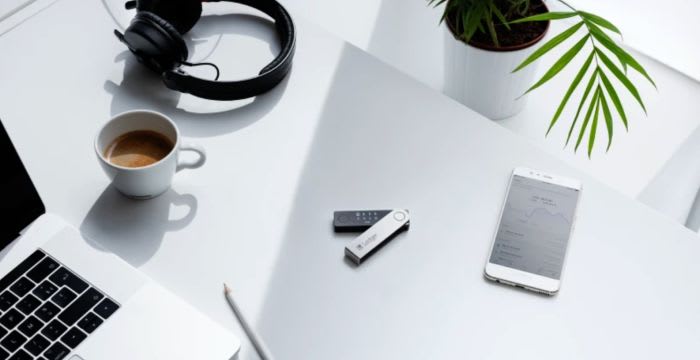 It seems unbelievable now, but back in 2016 Ledger Wallet used to claim they would not support any altcoins.

They obviously started adding altcoin support to Nano S with the first altcoin bubble in 2017.

Via 3rd party private key management: All Ethereum tokens of the ERC20 standard. All ETH tokens can be managed using Ledger Nano S and Ledger Blue with MyEtherWallet.

Trezor is not as popular as Ledger because it’s slightly more expensive and doesn’t do much in the way of marketing. It is technically not a worse choice though. Especially the new Trezor T with Shamir seeds is the bleeding edge of crypto hardware right now.

From the user’s point of view, Trezor utilizes a similar system as the Ledger Wallet.

There is a set of native apps, you are able to manage several cryptocurrency wallets from a web app after unlocking your access with your PIN.

Trezor developers take much longer time to implement new features by popular demand - for instance there is no staking directly from wallet and coin control is only to be implemented later in 2021 for the first time.

On the other hand, that can play into some cryptocurrency holders’ conservative approach. It is generally safe to assume that not rushing to implement every new feature makes the device less plagued by vulnerabilities.

Electrum for Altcoins: Be careful

While Electrum for Bitcoin (https://electrum.org/) is a very safe option, you should be careful with Electrum for altcoins.

The altcoin spin-offs of Electrum are just “forks”. The Electrum code is open-source, which means anyone can create and publish a fork of it. These forks are not affiliated with the original Electrum code or its author.

They can well be full of malware, despite carrying the same “brand” name Electrum. That’s just how open-source software works.

Most web-based wallets, the private keys are stored by a third party. You should not consider these as a safe altcoin storage.

Opt for blockchain.com or one of the multicoin wallets for smartphones like Exodus or Jaxx for a good ratio of convenience and security.

This article was first ever published in February 2016 and has been continually updated. Last major update was on .